Over the last several years, as technology moves at hyperwarped speeds that we haven’t yet invented fancy enough new words to describe, there’s been a backlash of purists and throwbacks who prefer things how they used to be. That could be true of film, art, sports, journalism, lots of things. But it’s particularly interesting in how it pertains to music. 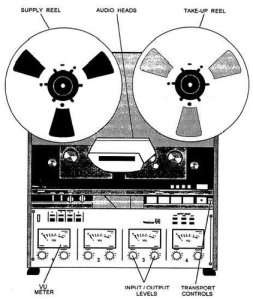 This is not what's inside a laptop.

I’m mostly talking about process. It’s not just the access, the fact that anyone can record their own “album” in their basement with a laptop (and seems like everyone has), but also how the technology at the high end affects the professional artists we know and love and the ones we’ll actually discover tomorrow. Somehow the process has become a bigger part of the back story for a particular album or group. “They uploaded their demos, went viral, and now they’re selling millions!” It’s the updated take on discovering the Next Dylan on a barstool at an open mic somewhere.

Nowadays, musicians are reclaiming some sort of authenticity in what seems a reaction to this technological explosion. One of the poster boys for this movement has been Jack White, using vintage gear, cherishing vinyl and launching a real full-service label, not to mention that scene where he strings together a homemade guitar in a cow field in the film It Might Get Loud (contrasted by tech wiz The Edge and all his pedals and effects). But these analog guys who take a similar approach to Jack White’s (with less memorable results) are too numerous to list. The point is, we tend to gravitate toward authenticity, and it’s also natural to yearn for “the old days” (again, no matter the genre or medium).

It’s also easy to tear down and rip on anything that could be painted as “synthetic” or simply created (faked?) through the use of computers. It stinks of money and, possibly, inauthenticity! But really, I don’t care how many laptops and how much fancy software you have, you can’t fake not having songs that suck. The songs don’t lie. Sure, they can trick you and maybe you might think they’re better looking in a certain light late at night, but the next morning always comes. The same holds true for Mr. Vintage Authentic who only records to tape and refuses modern technology. That’s fine, but he too still needs good songs.

So assuming we’re only talking about our own personal vision of “good songs” and quality artists, we’re back to process. Does it matter to you when you hear someone “recorded his new album on a 4-track in a remote cabin in the woods” vs. “layed down tracks in various professional studios in L.A. and NYC”? The end result is all that should really matter, but subconsciously I think we all assign certain imagery and associations with the process. “Oh I heard he got sober and found god and had his yoga instructor in the studio with him” or “They locked themselves in the basement and rocked out live and recorded it all in one or two takes.” 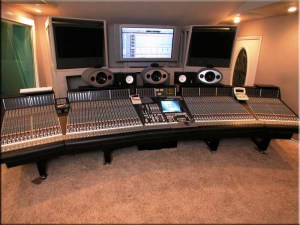 None of these buttons can write a song.

Recently, we were told that Dave Grohl and his Foo Fighters recorded in a more live/raw environment in his garage. Guess what? To me it still sounds like a slick big-money-backed recording done on Pro Tools. (Not saying that’s a bad thing, just saying that my ears couldn’t tell the difference. Good for them if it felt better to do it that way.) Kanye West says most of the work for 2010’s My Beautiful Dark Twisted Fantasy was done by sending beats and rhymes over emails, and that he approached Watch the Throne, his new collaboration with Jay Z, differently. They did everything together in studios. Some quotes allude to being able to vibe better in person than you can attempt over long distances. Yea, of course. (But I think in this case, changing the process was more about preventing the album from leaking early, but that’s another story.)

Rick Rubin already had a legendary resume, from classic rap and metal to mainstream platinum-selling rock, but he cemented that legend by simply setting up a couple of mics in front of an aging Johnny Cash. For his last album, John Mellencamp enlisted big-name producer and Grammy-magnet T-Bone Burnett and had him record in Mono, in makeshift locations (some with storied recording histories). Cool process, but it worked mostly cuz the songs were good.

I guess we’ve always been somewhat fascinated by process, from Alan Lomax’s field recordings to George Martin figuring out just how to do all those crazy things the Beatles had in mind, to Radiohead turning blips and beeps into bliss. Bruce Springsteen infamously carried around a cassette of 4-track demos in his back pocket that eventually became the master recording of 1982’s Nebraska. It’s remembered as a stunner because the stories and the songs are great, but that back story, in this case an accidental process, is ingrained within that piece of art.

While somewhere some kid is psyched that he can record and distribute and promote his music all from home on his laptop (and that’s great), he’s not that great.

And the ones who are great, who’ve already made it and can afford any process they choose, more often than not gravitate toward “how it used to be done.” As official press releases announced word of his forthcoming new album, Ryan Adams posted to his Facebook page:

“New album is called Ashes & Fire. It was produced by Glyn Johns (rock’n’roll wizard & true gentleman). It has 11 songs on it. I played acoustic on all of them and sang and played live to tape. We recorded the album ALL 100 percent ANALOG ( 2″ tape mixed to 1/4″ ). A computer didn’t touch this album. It has very few overdubs. I gave these songs the most consideration I have ever given and it is certainly the longest amount of time I’ve spent writing. It was made with total love. Very excited. XX”

It’s interesting that he seems most excited about the process. And it’s hard to blame him for being giddy not just about the songs, but of this magical process we’ve grown up idolizing and listening to and attempting to participate in and experiment with. On top of the fact that the legendary Glyn Johns has worked with Dylan, The Beatles, so many others, and recorded and mixed one of the great rock records of all time, Who’s Next for The Who. Of course, an acoustic-based Ryan Adams record in 2011 couldn’t and shouldn’t sound like a Who album from 1971. But we trust Glyn Johns. We might not know exactly what his process is, we just know he gets results.

It’s neat to see the apparent excitement over the fact that “a computer didn’t touch this album.” And as a fan, it’s cool to read about. On my computer. On this magic website we all use to interact now.

As someone who’s been a part of several types of recording projects, I can appreciate being proud of or partial to a certain process, be it old school or new.

There’s no right or wrong way to make art. Certainly I understand that some new technologies might sound synthetic or “cold” and that there will always be processes that might be “archaic” but could still be the only ways to yield certain desired results. But “authenticity” is an abstract in the squinting eye of the skeptical.

It’s fun to study and try to participate in this process we call recording. But results can be found and heard many ways. So, as always, listen to your ears, if that makes any sense.