The band Jackie and The Treehorns (disclaimer: I am a member) have released the first episode of their new official comic strip “The Adventures of Jackie and The Treehorns.” Each strip will be based off a song in their catalog. In the debut story the band encounters an alien while on tour. Only this time, it is the band that does the abducting. You can click on the image to view the strip in a web page, which gives you a higher resolution imagery. 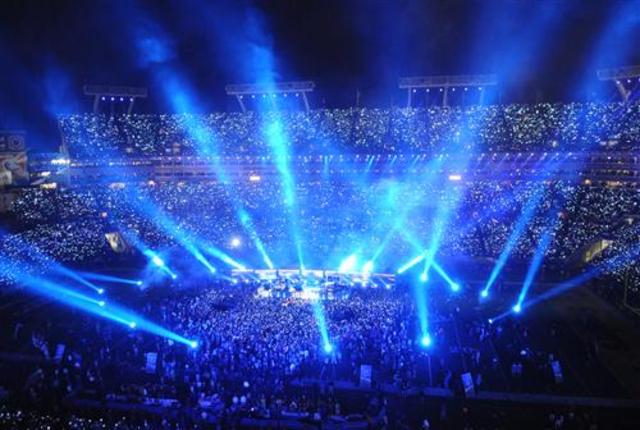 Ranking the best Super Bowl halftime shows is a subjective and predictable (and pointless) exercise. But let’s do it anyway. Just as the Super Bowl game on the field has changed over the years and gotten bigger (and sometimes better), so too has the halftime show.

In the early days, when the league and game itself were not as big as they are today, the halftime shows were simple marching-band extensions of regular football games. As the years passed, they added occasional singers like Ella Fitzgerald and such pop celebrities as Carol Channing (twice). The Super Bowl Halftime Show as we know it today was not quite a “thing” yet.

As late as the 1980s, it was still just marching bands and Up With People performing salutes to random themes. (According to one of the great first lines on all of Wikipedia, “Up with People is an education organization whose stated mission is to bridge cultural barriers and create global understanding through service and a musical show.”) One year it was a “Salute to the Stars of the Silver Screen.” Just three years later, the theme was “Salute to the 100th Anniversary of Hollywood” (with George Burns, Mickey Rooney, and Disney characters). Other years they would salute the big-band era and “the 1960s and Motown.” In fact, they would even haphazardly combine tributes, as if some board-room decision had ended in a tie:  the 1990 theme was “Salute to New Orleans and the 40th Anniversary of Peanuts.”

10.) JANET JACKSON (w/ JUSTIN TIMBERLAKE)
SB XXXVIII – Feb 1, 2004 – Reliant Stadium (Houston, TX)
Unfortunately, nothing written about Super Bowl halftime shows is complete without mentioning perhaps the most famous, or infamous, halftime show. Sadly its pop-culture significance will keep it on lists like this forever. Oh, you don’t remember this one? At the end of the performance, Justin Timberlake ripped off a piece of Janet’s, uh, wardrobe and revealed most of her bare breast. This was called “nipplegate” even though Miss Jackson made sure her nipple was covered. She showed about the same amount of her body as an average beer commercial by an Official NFL Beer Sponsor. But it was such an outrage to see that for 2 seconds on live TV that all the news and media outlets spent at least a week editorializing on just how awful and classless it was… all while showing a still photo of said exposed breast. This led to several years of only aging male classic rockers performing at the Super Bowl.

8.) BRUNO MARS (w/ RED HOT CHILI PEPPERS)
SB XLVIII – Feb 2, 2014 – Reliant Stadium (Houston, TX)
Okay, younger artist with some hits but not quite the household name with some older viewers. By any measure, Bruno Mars nailed his performance. He can sing, he can dance, he can open the show with a drum solo, he brings a horn section, and then he has the Chili Peppers pop out of the stage floor to “givitaway givitaway give it away now.” Exhilarating and professional performance.

7.) ROLLING STONES
SB XL – Feb 5, 2006 – Ford Field (Detroit, MI)
At this point, the Rolling Stones are just game managers. Rock royalty just needs to show up, play a few hits, and fill the stadium with classic riffs. Oh, and do it on a stage shaped like the Stones’ lips/tongue logo.

6.) TOM PETTY & the HEARTBREAKERS
SB XLII – Feb 3, 2008 – University of Phoenix Stadium (Glendale, AZ)
Sandwiched around Tom Petty & the Heartbreakers solid (if unspectacular) performance of hits was the Patriots-Giants “Helmet Catch” game: a truly great Super Bowl, as well as a huge upset of an undefeated team. We don’t need always need guest rappers or genre-bending collaborations. (Aerosmith-Britney-N’Sync? No thanks.) Petty and his underrated band have been a radio staple for decades. Capable rock bands with good songs are like balanced football teams with good offensive lines.