When did KRS-One join the witness protection program? 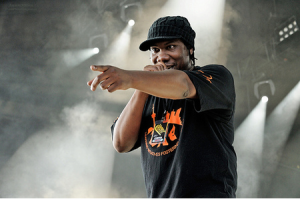 Have you seen this man? KRS-One is still on point.

He didn’t. In fact, it’s quite the opposite: he’s actually put out seven really good albums over the last five years alone. And yet it feels like he’s disappeared right out there in the open. You would think with so many people lamenting the alleged Death of Hip-Hop that a legend like KRS-One would get recognized for dropping a few instant classics over the last several years.

Music bloggers and casual rap fans wait with bated breath any time Kanye West puts out an album and declare the last and next Roots album a classic and wish to the heavens that OutKast will some day make another album. People are losing their minds waiting for Dr. Dre to finish Detox, the album he’s supposedly been working on for almost 10 years. And yet there’s KRS the Teacha, a unanimous “Greatest of All Time” on everyone’s shortlist no matter the criteria, and he’s not just still alive, or still recording… he’s making some of his strongest albums ever.

Don’t believe me? Go listen to Survival Skills, the 2009 album he made with Buckshot. This is easily my favorite hip-hop record of the last five years. If you click away from this article considering buying one album, it should be this one. It’s just a perfect storm of quality beats/production with the solid 1-2 punch of Kris and Buckshot on the mic.

Still not convinced? Did you know he made an album with Wu-Tang production disciple True Master in 2010? Picture KRS-One doing his metaphysical lyrical lectures over that grimy sound you’d expect from a producer off the RZA tree.

And that’s not all.

Let’s actually rewind and take it back to 2008, when Maximum Strength sounded like KRS-One was still capable of making the classic banger he hadn’t made in over a decade. Following his 90’s peak (his self-titled 1995 album), I Got Next (1997) was a hit but also signaled the beginning of the end. He’d go four years before releasing his next album, the decent but uneven Sneak Attack. The rest of the 2000’s saw a string of 10 lackluster albums that only hinted at his true genius (it’s hard to even fact check; his official discography differs from site to site, adding to this whole witness protection mystery). That’s right, approximately 10 albums from 2001 to 2007 (and those are the ones I’m discarding as mediocre).

So 2008’s Maximum Strength comes out and it’s pretty slammin. Kris sounds sharp, he’s chosen some decent beats. OK, cool. This is probably the weakest of this recent run, but it seemed to signal a shift in the right direction. 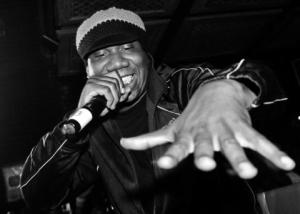 The following year is when the aforementioned Survival Skills dropped, kicking off a run of collaboration albums that have all been straight fire. It’s one thing for Jay-Z and Kanye to pair up and make one great album (Watch the Throne), or for a legend like Eminem to team up with a lesser-known but respected MC like Royce da 5’9” (Bad Meets Evil: Hell the Sequel ). But KRS-One has now made FOUR such albums over the last four years:  Survival Skills with Buckshot (2009), Meta-Historical with True Master (2010), Godsville with Showbiz (2011), and the absolute ass-kicking Royalty Check with Bumpy Knuckles (2011). [That doesn’t even count the 2007 album he made with Marly Marl, Hip-Hop Lives, cuz I haven’t heard it.]

On top of all that, he also managed to release a solo EP, Back to the L.A.B. in 2010, six hard classic-sounding tracks from the Blastmaster. Fittingly, “L.A.B.” stands for Lyrical Ass Beating, and Kris delivers yet again. This one is definitely a standout among this recent run.

And oh by the way, in January of 2012 he put out The BDP Album with his brother Kenny Parker handling the production. Spoiler alert: this one is really good too. Score it as a solo record, a collaboration, or the first new “BDP” album in a generation, I don’t know. At this point I’m as confused by the details of what’s come out as I am baffled by the fact that all these amazing albums have been largely ignored by the mainstream.

He comes off as confident as ever, and yet he still sounds hungry. The verbal gymnastics are one thing, of course KRS can bring the delivery and work the wordplay on the mic, but the depth and longevity of this man is nothing short of incredible. At the risk of overstating it, it’s an embarrassment of riches. If he was quietly dropping duds and had lost his skills, turned into Jordan-on-the-Wizards without the fanfare, it might make sense. But this is a legendary pioneer, one of the best ever to rock a mic, seemingly at the peak of his powers, and no one’s noticing.

I realize that young guns and one-hit wonders will always be at the forefront of popular culture, especially in hip-hop, and maybe all the awards shows, all-star games, and late-night TV shows have all begged KRS-One to come on and he’s said no. I don’t know. He’s never really played ball with the big record labels, but “going indie” doesn’t (and shouldn’t) disappear an artist the way it may have back in the day.

So why is he practically invisible despite being an undisputed legend doing some of his best work? Don’t we usually celebrate the Jay-Zs and Eminems of the world when they drop a great album? Isn’t that part of why we mark every anniversary of the tragic murders of Tupac Shakur and Biggie Smalls? Cuz we wonder what might have been, shaking our heads in the silence of their never-recorded classics.

Does KRS-One just choose to operate in the shadows, as he probably did all those years ago as a teenage graffiti artist in the Bronx? Is it simply a matter of the cliché about people not wanting to hear The Hard Truth? Is he too anti-establishment, too spiritual? Maybe. But, just as happened with his Stop The Violence Movement in 1989, once again a positive message in hip-hop is ignored (squashed?) while bling, beef, and bullet holes make the headlines.

Seems unfair; a cultural injustice. If only there were more witnesses.

I think the title is clear enough: these are the 10 best 3-consecutive album runs. The only general guidelines were: no live albums, no ep’s, no greatest hits/collections, and of course they had to be 3 in a row by the same artist. here’s the list, in no particular order:

1. Bob Dylan
Bringing it All Back Home, Highway 61 Revisited, and Blonde on Blonde. If you don’t automatically nod your head in knowing concurrence with the greatness of these three releases, stop wasting time on the computer and go buy these CD’s. And to think that 40 years later he posted Time Out of Mind, Love and Theft, and Modern Times. A solid run that late in a career, but not great enough to make this list.

2. Rolling Stones
Let it Bleed, Sticky Fingers, and Exile on Main Street. Steven Van Zandt (Silvio Dante, E Street guitarist, and underground garage rock DJ extraordinaire) once said, “Beggars Banquet to Exile on Main Street make up the greatest run of albums in history—all done in three and a half years.” Sorry Little Steven, we only have room for three on this list.

3. The Beatles
Rubber Soul, Revolver, and Sgt. Pepper’s Lonely Hearts Club Band. Or: Sgt. Pepper, Magical Mystery Tour, and the white album. Or: Help!, Rubber Soul, and Revolver… or… you get the idea.

5. Neil Young
Everybody Knows This is Nowhere, After the Gold Rush, and Harvest. Once again, with an artist this good you could pick a different three. I picked these.

END_OF_DOCUMENT_TOKEN_TO_BE_REPLACED

Originally, I set out to compile my list of the Top 20 Albums of the Decade. The 2000’s. Or the Aughts. Yea, I guess we never got around to naming this decade and now it’s already ending. I thought I was realistic by not even attempting a Top 10 Best Albums of the 2000’s, but it turns out even 20 proved difficult. And once I passed 20, the albums just kept flowing and then I thought “okay, Top 40 would be good, since “Top 40” is sort of a tried and true phrase in popular music. Then I hit 50. OK, I’ll do a Top 50, why not! Then I got to 52 and beyond and finally just gave up and let myself list all the great albums I loved this decade and not worry about cutting any out just to keep the list at 20, 40 or 50. So I ended up with 65. Seems a bit excessive, sure. But it’s still only about 6 or 7 per year. And I easily could have added a few more. Actually, I could just call this a Top 50 Best Albums of the Decade list because they’re not numbered, and if you actually read through it and count the exact number of albums, I’m just glad you’re reading our blog.

Please add your Top 5, 10, or 65 favorite albums of the decade (or point out my glaring omissions) in the comments section. Now, on with the list…

Mos Def – Black on Both Sides (1999)
First album on the list and I’m already cheating. This one came out just a couple months before 2000, and is such a great album. One of the best hip-hop albums of all time, even if you don’t see it on such lists in the mainstream media. So why not kick off this list with the last great album of the previous century?

Aimee Mann – Bachelor No. 2, or the last remains of the dodo

U2 – All That You Can’t Leave Behind
It’s pretty easy to hate on these grandiose mega-stars, but this was and is a truly great U2 album made several years after most of us figured they’d never do it again.

Wilco – Yankee Hotel Foxtrot
This one would probably make the list even there were only 5 albums on it. Songwriting, atmosphere, and using the studio as an instrument without getting too cute or overdoing it. It’s all here, a classic peak from a great band.

Sonic Youth – Murray Street
This is how I love my Sonic Youth. This album and the three that have followed are all really good. I actually like this (and those other recent ones) more than their old classics. Blasphemy for hardcore SY fans and a nation of hipsters, I know.

Elvis Costello – When I Was Cruel

Bright Eyes – Lifted, Or the Story Is in the Soil, Keep Your Ear to the Ground

The Roots – Phrenology
A bit all over the place stylistically and a bit long, but still mostly brilliant. It’s like their White Album.