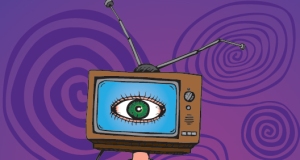 I watch way too much TV. Anyone within earshot of me on a daily basis probably thinks that I spend all of my free time watching television shows and then recapping them with friends and co-workers. To some degree this is true. I believe we are (still) in “The Golden Age Of Television” (a term I did not make up but one that critics generally refer to as anything that’s been put on TV since The Sopranos first aired. If you ask me, it started with HBO’s Oz, but I won’t rock the boat on this one). I have nothing against non-TV watchers, I just want you to know that you are missing out on some quality programming these days.

With the rise of Netflix, Amazon Prime, Hulu, HBO Go, iTunes, etc. binge watching has replaced good old fashion week-to-week anticipation. Cliffhanger ended the last episode? Don’t want to wait a week (or a year) to see who killed off your favorite character? Simply click the “Next Episode” button and binge away. Netflix even goes as far as releasing every episode of its shows seasons at once. Anticipation be damned!

Online recaps are as abundant as Starbucks and McDonald’s. Noted publications/sites from The New Yorker to Rolling Stone run endless stories, interviews, recaps, discussions, and podcasts about popular television series. The most recent season debut of The Walking Dead drew over 16 million viewers (to put that into perspective, there are around 300 million people in the US. 16+ million of them are watching a show about zombies). I am one of those 16 million viewers and I watch–and have watched–a ton of television series in my day (mostly dramas). Way too much some would say.

You might be very apprehensive when it comes to deciding which series to watch first–since there are so many good choices out there. Even if you missed the initial run of The West Wing you can easily binge through all its seasons online. But should you watch that or catch up on Mad Men? Is True Blood worth diving into? How many seasons behind am I? You hear “everyone” talking about how great these shows are and you’re kinda interested in them but don’t know where to start. I equate it with how I feel when I walk into a really good music store (yes, some do still exist!): I am overwhelmed with having to narrow down my choices in order make a selection. When I sift through 80 Zappa records trying to figure out which one to buy, how do I know which one to begin with?

So lucky for you (I think?) I am here to write you a list of what I feel are excellent television series that you should watch. This is not a list of the “best shows ever” in some arbitrary order (I mean, how could I say The Wire is better than The Sopranos or vice-versa? I can’t!).  I am purposefully not putting numbers in here because I cannot rank them in terms of greatness.

The following list contains my personal favorites when it comes to great television.  I hope that if there is a series on this list you have not watched–or have been tempted to watch–that my brief explanation(s) of the show(s) might intrigue you enough to get started. (Note: I did my best to not include any spoilers.)

END_OF_DOCUMENT_TOKEN_TO_BE_REPLACED 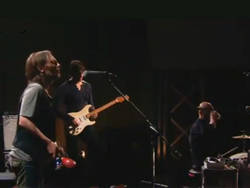 I have DirecTV and there is channel called Palladia that often shows a variety of live musical performances. The following is a running diary of my initial viewing of “From The Basement: Radiohead: The King of Limbs.” Basically, it’s Radiohead performing in a recording studio with no viewable audience.

“Bloom”
Right off the bat it’s awesome. We got Portishead alum Clive Deamer rocking the drum pads and Jonny Greenwood on the snares, couple of horn players, and an oddly syncopated structure. Love the freakin bass line on this. Sounds like something off a Coltrane record. How in the hell do these guys do it? Guess now I can watch and see.

“Daily Mail”
Starts as a classic Radiohead piano ballad, which means I love it, cause the Neil fan in me always has a soft spot for em. I fall for them every time. How I would love to be able to switch up instruments each song, add some extra musicians to jam with, and make it all work practically flawlessly.

“Feral”
Just turned it up even more, low-end is deep on it. I think im watching what might have happened if Floyd never broke up.

“Little By Little”
Have to say I love their usage of the dual drummer/electro-instrumentalist. What if you could make one person play as an entire band? Like those one-man bands you’d see at Great Adventure. I suppose that’s called a DJ.  I also just started thinking about how it’s really gotten to the point where you can’t describe what Radiohead sounds like. Their influences are all over the place and they really don’t sound like any other band, current or past.

“Codex”
This is one of my favorite tracks on the album. Ok, I’ll admit it, the band does sometimes tend to look on the somber side at points during this particular segment, but what do you want them to do during an intro like that? Jump up and down? Let’s just chalk it up as a result of the intensity it must feel like to perform in Radiohead. At any point do you think Ed O’Brien thinks to himself:  “holy shit, were fuckin good!”

END_OF_DOCUMENT_TOKEN_TO_BE_REPLACED 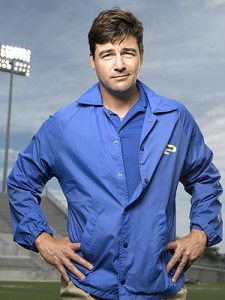 You don't want to disappoint the coach, do you?

We were getting ready for a show down against conference rival the Arnett-Mead Tigers.  Coach was standing over us after every drill.  After every missed tackle he began to ask us to search deep in our soul as to whether or not we wanted victory.

He was looking to motivate us.  He wanted us to challenge ourselves in order to prove that we had it within ourselves to defeat our rivals in battle on gridiron. After every whistle he bated our egos.

Fast forward – it is half time and the score board is reflecting the domination being dispensed at the hands of our opponents.  Despite all of the hard work we had put in as a team our efforts thus far on the field have been less than spectacular.  Despite coaches warnings earlier in the week we did not head his words as the Tigers had, thus far, come to destroy us and after two quarters of play they were doing their best to defeat us soundly with the score marked at 17-0 for the bad guys.

END_OF_DOCUMENT_TOKEN_TO_BE_REPLACED 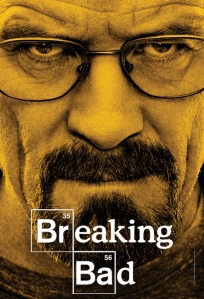 All too often, when discussing various versions of the “blank blank is the best blank blank blank ever” (fill in movie, music, tv show, book, actor, etc.), people either tend to jump to an already established popular choice (The Godfather is the best movie ever, The Sopranos is the best television show ever; Marlon Brando is the best actor ever, Shakespeare is the best writer, Hendrix is the best guitar player, New York is the best evuh) or try to uniquely identify their tastes by declaring some other off-beat preference, such as, “The Killers are the best band ever.”

There has been a lot of (or perhaps not enough?) talk lately about AMC’s drama Breaking Bad, which is starting it’s highly anticipated fourth season in July 2011. Forget about Mad Men, Boardwalk Empire, Dexter, Rescue Me, The Killing, Game of Thrones, The Walking Dead, or any other major network program, the realization is, no show is better written, acted, or more intriguing than Breaking Bad is at this very moment.

I am here to tell you that Breaking Bad is the best show on TV right now.

END_OF_DOCUMENT_TOKEN_TO_BE_REPLACED

Long before The Social Network, but not long after A Few Good Men and The American President, Aaron Sorkin combined the latter two movies and created the Emmy Award-winning television drama The West Wing on NBC. The show ran for seven seasons (1999-2006) and covered a plethora of political and personal topics that were both timely and overtly dramatic.

Luckily, for those of you that didn’t watch the show when it originally aired, we now have NetFlix and various other avenues by which we can view an older television series. Now, watching an entire season of any show only requires a rainy weekend and, oh, say about, 10-20 hours of free time to kill. Lucky for me (I think) I was hooked on the original running of the series before it even aired. I remember there being plenty of hype for it before the pilot episode even hit NBC.

One of the most interesting things about going back and re-watching movies or television shows (or music) is discovering if you still feel the same way about it after subsequent viewings as you did upon the initial one. Shows like The Wire or Deadwood undoubtedly grow more and more engaging with multiple viewings, once you are able to absorb more of the dialogue, character development, and plot lines. When The West Wing originally aired, there was no such thing as pausing or recording live tv, no Tivo or NetFlix. If you missed an episode, well, you were screwed (unless someone you knew taped it on their VCR). A relative once asked me what the point is in re-watching a movie you have already seen? My response was, “do you only listen to an album once?”