This modern world seems to have no use for “the Album,” as it’s been killed off when vinyl first died years ago and then revived during the compact disc era only to be wiped out again when CDs were phased out. Of course, vinyl has been reborn in recent years but “the Album” was again the victim of attempted murder as digital/streaming has let everyone make their own playlists or cherry pick a few songs from “the Album” and leave the rest to die unheard.

I say “attempted” murder because “the Album” has managed to live on. While streaming platforms put $10/month into the smartphone and data companies’ pockets (with SEVERAL pennies still going to artists!), it has inadvertently allowed everyone from the casual fan to the obsessive fanatic to hear complete albums they might not have ever considered buying. This new music business, for better or for worse, allows you to get hip to all the new releases that your music-obsessed album-aficionado friends are always telling you to check out.

So which 2019 albums are most worth your while? Well I’m still an album guy, and there’s something for everyone in the list below. Sorry, no paragraphs of clever descriptions and comparisons. ALL these albums are highly recommended, so if you’re curious what they sound like… just dial ‘em up:

Gang Starr – One of the Best Yet

The Raconteurs – Help Us Stranger

Vampire Weekend – Father of the Bride

Helado Negro – This Is How You Smile

END_OF_DOCUMENT_TOKEN_TO_BE_REPLACED

This is the best hard rock album of the year.

I wanna rock! Seriously, I really wanna rock, and I know you also enjoy rocking out. To rock, and rock music, is at the core of our being, as most music fanatics were turned on, raised, and possibly brainwashed by Satanic forces to feel the primal attraction of rock music.

This is often best expressed by hard rock and heavy metal. So it was written by Black Sabbath and Led Zeppelin, and so it has since been done. But most people, probably including you, are pansies like me. We don’t listen to all that crazy death metal and black metal and deathcore and goregrind and whatever other sub-core speed genres of anti-pop horror-metal madness exist out there.

I’ve got a couple of very close friends who are metal freaks. I’m sure you do too. But for pussies like us, we’re okay to just burn out on Them Crooked Vultures and maybe crank some old-school Van Halen in the car and be done with it. Some of you dig on the Foo Fighters cuz their CD’s are so much louder than most of your other ones. You like to name check Queens of the Stone Age, but “No One Knows” that you never actually heard Rated R. You probably dig on the Deftones and Disturbed and possibly some stuff that sounds like Slipknot, but System of a Down was a bit too intense and political. Hopefully you don’t rock out to Linkin Park at the gym. I don’t. But then again, I don’t go to the gym.

Well fear not, rock fans who crave something a little goddamn harder than fucking Wilco or My Morning Jacket but don’t want the bloodbath of Satanic butchery and mass-slaughter imagery infesting your precious earbuds.

Behold The Hunter, the new album from Mastodon.

Certainly not a household name, they’ve never been on Dancing With The Stars or served as guest judges or mentors on any of the other 14,682 talent-show style “reality” shows, Mastodon is one of those crazy talented bands of musicians with the kind of extreme chops that leave many jaws dropped. But, so far, their hard rock/metal has skewed a little proggy, so it was like some Rush-meets-Tool kinda thing with concept albums and 12-minute songs.

This is the deluxe version.

The Hunter is already being received as their “more accessible” album that pisses off the hardcore fan base but attracts the accolades of casual hard rock fans and possibly some non-metal bloggers working on their snarky reaction to the Lou Reed/Metallic collaboration. With apologies to any Mastodonians who feel like their favorite band is “selling out” (impossible these days anyway), The Hunter is perfect for fans of the band who’ve been waiting for them to make an Album Like This, and for people like me who need and want to rock the fuck out and turn it up to 11 but only sometimes.

This album is badass, and yet just catchy enough in its badassery to keep the festivities moving from one crunching riff and sick drum fill to the next. The vocals certainly sound like they hurt somebody’s throat, as well they should, but they are not so in your face or gory to turn off any casual listeners. It just kicks ass. But Mastadon is a different animal: among the mayhem it manages to mix in an obvious “The love I make is equal to the love I take” nod to the Beatles lyric, while “Creature Lives” features an intro that sounds like it’s covering two Pink Floyd intros at the same time.

Strongly rooted in the Black Sabbath basics, Mastodon’s technical proficiency allows them to elevate their stoner rock to high-grade medicinal levels. And it remains concise and hard hitting, certainly recommended if you lean a bit closer to Clutch than Slayer and prefer your Tool albums to have less hot-yoga droning interludes.

So if you crave that metallic taste in your ears without the messy dismemberments and commitments to spend eternity in damnation, pick up Mastodon’s The Hunter and crank that shit up.

It used to “matter” that certain musicians/artists wouldn’t sell out. It was a line in the sand where you knew some whack-ass pop star would sell his song/image to the highest bidder, but Neil Young would always say no to Budweiser and Bruce Springsteen said no to Chevy (and we all got the Bob Seger “Like a Rock” commercials). 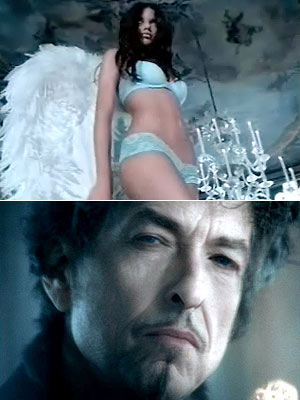 But one day, it just didn’t matter any more. Getting your song on a Lexus or iPod commercial was just good business, and really not that different from being in heavy rotation on the radio back when that was the only way people heard new music.

Do you still care if/when someone sells out? Is it even possible to sell out anymore? When did selling out jump the shark?

Mike Eddy: This is a great topic – we all could go on and on about it. I say that because being a “sell out” means something to our generation. Not selling out validates the artist to us and somehow makes them seem more true to us. But if we polled a bunch of early 20-somethings, would they even know what a sellout is? Do they care? Probably not, due to the overwhelming amount of current music and artists selling/promoting different products. Infomercials, logo’d clothing, etc… promotion and endorsement is everywhere. It’s what they’ve grown up with and it’s very different from when we were that age. We are all like-minded in looking at bands that we enjoy and hoping that their 4th or 5th album is that much better than the first. The entire industry is now based on individual songs and no real expectation that the “artist” will still be around in 2 years: “take it while you can and as much as you can” seems to be more of the flavor in the minds of musicians today.

Not saying that I’d like “my favorite band” to be on the new Ford commercial, but at the end of the day it plays no part in how good their music is. We have the notion in our heads that selling out is lessening the quality when it is only our perception of what WE want them to be. END_OF_DOCUMENT_TOKEN_TO_BE_REPLACED

#10  AC/DC – BACK IN BLACK
Nigel Tufnel of Spinal Tap: “I think he is right, there is something about this, that’s that’s so black, it’s like; “How much more black could this be?” and the answer is: “None, none…more black.”