I am right-handed. I throw a ball right-handed, when I used to actually use a pen and paper I wrote right-handed, I kick right-handed, punch right-handed, and play drums right-handed. But I play guitar left-handed. It’s odd, I know. When I was 13 years old and just beginning my excursion into learning the instrument the most common advice I received from other players was “practice” and “learn how to play right-handed.” I did the first, never bothered with the second.

At the time I didn’t understand why anyone would actually care if I played lefty or righty. Now I realize why: do you know how hard it is to find a left-handed guitar and/or accessory options? They are out there, of course, and I have obviously been able to purchase quite a few in my day. But walk into most any music store and you will undoubtedly see dozens upon dozens of guitars, 97% of which are right-handed (you might find a few lefties in the mix; usually shitty, low-level Strat and Les Paul knock-offs). You would think, considering some of the all-time great players have been left-handed, we wouldn’t be so ‘discriminated’ against. Is it wrong that I find some pleasurable ironic humor in situations where right-handed players are in my midst without their guitars and they can’t play mine because it’s “backwards”? Call it cosmic payback, musician karma, whatever. Come on, I can at least pick up a righty and throw together some chords. Probably because I have spent my entire playing life surrounded by you backward-ass right-handed players.

Which leads me to the reason I am even writing this post: to celebrate the influence that some of rock and rolls lefties have brought us. I bring you, what I feel is, a list of some of the most-influential guitar players of all time. And guess what? They are all lefties! 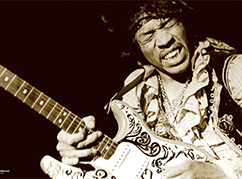 Really going out on a limb here, huh? The most obvious choice on the list. The one no one would disagree with. I won’t spend any time here writing about Hendrix’s influence on the guitar because if you don’t already know then you must also hate America, not support the troops, and enjoy slaughtering kittens and puppies in your spare time. There is not a single guitar player, guitar amp, guitar pedal, guitar sound, that has not, in some way, indirectly or directly, been influenced by James Mashall Hendrix.

Some might argue he isn’t really a “guitar” player since the bass is his main instrument. Macca has played plenty of guitar in his day (ummm, “Blackbird” anyone?) and just the fact that he was in the fucking Beatles automatically makes him one of the most-influential musicians of all time. Ok, I might be stretching it a little bit here but come on, Sir Paul plays his stringed instruments left-handed and he’s arguably the highest profile player on the list.

Dude essentially invented a music genre that has since split-off into about 245 sub genres. That, in and of itself, shows his immense influence. Every hard rock player from Eddie Van Halen to Jack White owes a little something to this man. There is not a better riff writer on the planet. Don’t believe me? Go listen to the entire Paranoid album and tell me it’s not, well, friggin’ awesome. 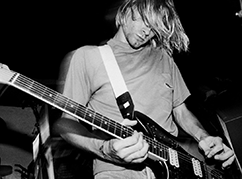 Not exactly known as a guitar virtuoso but his influence is still showing itself all over the musical spectrum. What I like best about Cobain is that his playing wasn’t showy or super-technical, it was emotive. And he could write damn good songs. Just as The Ramones showed thousands of kids you didn’t need to play like Jimmy Page in order to be considered great, Kurt’s influence is more style than substance.