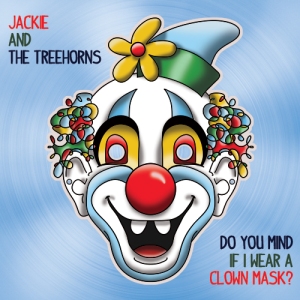 Before you listen to this Jackie & the Treehorns album, before you share this review, tell me what your friend’s band sounds like.

They’re good, aren’t they? Your friend’s band? They’re always really good, not just because they’re your friends. I’ve always been a bit too fascinated with how we talk about music, why we attempt to write about music and put into words that which can’t and doesn’t need to be explained.

So the next question is how do we listen to and process our friend’s bands? What if it’s our brother, or our best friend, or just dudes we knew in college? And do we overvalue how “great” they are? Cuz let’s face it, some of your friend’s bands aren’t that great. But that’s awesome that you still talk them up.

When you hear your friend’s new demo (or soundcloud thingy or youtube “trailer” for their upcoming album), do you think about how your boy once rocked a C&C Music Factory cassingle in his car and now he’s got this super-serious Queens of the Stone Age hard rock vibe going? Our intimate knowledge of our friend’s life and known favorites and influences surely must taint our view of their music.

Wait, you can’t view music. This is how Jackie & the Treehorns trick you into using the word “taint” in their album review.

The point is, there is this indescribable difference in listening to your friend’s band versus the latest album from an actual famous rock star. For instance, I know Jack White is a minimalist rocker heavily steeped in and indebted to the blues. He’s a longtime champion of a truly “independent” business approach and has an extreme fondness for vintage, authentic recording gear and techniques. I know all of this because that is what he has presented to me on record and through interviews, etc. (And of course all of that is then remixed and regurgitated and re-imagined for me by all the people attempting to write about music.) I don’t actually know Jack White as a person, I didn’t hang out with him growing up in Detroit, I never worked with him as an upholsterer, and I’ve never been in any of his numerous bands or side projects.

But I’ve been in Jackie & the Treehorns. I was the original drummer, and also served as Jackie’s manager and confidant during such dizzying highs and lows of his career that there’s a documentary film about it. In fact, I’ve been in a few bands and side projects with my friend Steven Rubin, the guitarist, singer/songwriter, and mastermind producer behind Jackie & the Treehorns.

I know his influences. (I won’t name check them). I thought I knew his influences. Yes, I can hear some of them peaking out from behind the Clown Mask. And then there are new faces, or old faces with different masks on, and they’re singing too. I didn’t know he knew them. There are things about our friends that we don’t know.

Did you think your friend’s band would sound like this? What did you think they’d sound like? Do you feel guilty if, when your friend isn’t around, you tell people “They’re kinda like 311, but they totally don’t sound like them at all”? Are you a little ashamed that you’ve only made it out to see them ONCE, and you got there a little late, and honestly don’t even know what they sound like? You could always just mumble “sort of a Blues Traveler kinda thing” and hope the person either doesn’t get the reference or thinks it’s a good thing.

Have you ever lied to your friend? Or, more accurately, have you ever just not told the truth about how much you think they suck? Do you have a lot friends in bands? Are you reluctant to spread the good word about how great they are because the other friends you’re telling probably assume you’re only talking about your friend’s band just to let people know you’re the kinda cool person who knows people in bands?

Please don’t ask me what my friend’s band sounds like. Aren’t your friend’s bands true originals with a unique style that really doesn’t sound like anyone else? It’s almost impossible to know, but even if it wasn’t my friend’s band, I’d still think this was a great album.

Do you believe me? Will you check it out? Do you mind if I wear a clown mask?