Great Gig in the Sky: Pink Floyd’s The Endless River.

It’s hard to know through what prism we should even view the idea of A New Pink Floyd Album in 2014. But The Endless River has arrived: the first new Pink Floyd album in 20 years and reportedly their last.

Plenty has already been written regarding the “Post-Waters” era of The Floyd, referring to the mid-1980s departure of bassist and main songwriter/visionary for the legendary British band’s peak run from The Dark Side of the Moon through The Wall and The Final Cut. After legally retaining the Pink Floyd moniker, guitarist David Gilmour took the helm for 1987’s A Momentary Lapse of Reason and 1994’s The Division Bell (with drummer Nick Mason and keyboardist Rick Wright mostly along for the ride in name only for Momentary and much more involved for Division). Many fans and critics bemoaned that this modern-Floyd wasn’t the REAL Floyd without Waters. They weren’t necessarily wrong, if there had to be an ultimate answer to the question of “Which one’s Pink?”

I’ve recently come around to really like both albums, even if the accusations of Floyd-lite or “Pink Fraud” are not entirely false. But Gilmour’s amazing guitar tone, let alone performance, and overall sound quality make the latter-day Pink Floyd worth listening to. And let’s face it, Roger Waters hasn’t made any great solo albums. He made one pretty good one (The Pros and Cons of Hitchhiking) and a few painfully average and forgettable ones (a list that technically includes Floyd’s The Final Cut). The only thing missing from the post-Waters Floyd albums is him yelling at us about war and pudding.

Other than a one-off reunion for the Live-8 concert in 2005, more repackaged hits collections, and some remastered catalog reissues, Pink Floyd has been mostly dormant for the last 20 years and keyboardist Wright died of Cancer in 2008. So the sudden news of A New Pink Floyd Album was a bit surprising. Given the band history just summarized, and the considerable time that has passed, if “A New Pink Floyd Album” meant “Let’s throw out something that sounds like Momentary Lapse as an excuse to go on a money-grab tour with just two surviving members,” then it would have been a pathetic disaster. Thankfully, that’s not what this is… 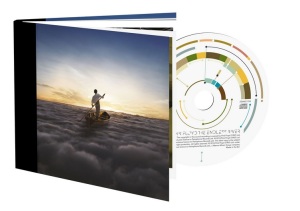 The Endless River is mostly instrumental jams left over from what was originally going to be an “ambient” companion disc to The Division Bell. The band has said it’s basically a tribute to Wright, as his pianos and keyboards are central to these tracks, though Gilmour and Mason added some overdubs and reworked a few things to flesh it out. There’s only one lyrical/vocal track, “Louder Than Words,” tastefully (thankfully?) placed at the end. Of all the things “A New Pink Floyd Album” could have been, I must say a mostly instrumental “ambient” record like this is probably the best possible scenario. Without any lyrics and singing to give the listener any outside preconceptions of what the song is “about” or force tired old comparisons to the old Waters material, the simple grooves and chord changes and wailing guitar sounds that were all very much as central to “the real Floyd” as Roger Waters himself, it’s almost like the dying body of Pink Floyd can finally… breathe…