In 2010, singer/songwriter Neal Casal released his photo book chronicling his time with Ryan Adams and the Cardinals, A View of Other Windows. We were fortunate enough to catch up with Neal after its release for an intimate conversation about music, photography, and the Cardinals.

Todd.Levinson.Frank: You’ve obviously been documenting the Cardinals for a while, when did you think it could and would make a decent book? If the Cardinals hadn’t “ended” in 2009, would this book have still come out this soon, or did the timing work out that this book would put a nice bow on the Cardinals era?

Neal Casal: I didn’t know these photos would make a decent book until the book was about 90% finished. I doubted the quality of the work until very late in the game. Once it was finished though, I knew it was up to standards and that we had achieved something special.

I didn’t start taking the photos with the intention of making a book, I was just doing it because I loved to take photos of my band mates. The idea of the photos being a book came much later. 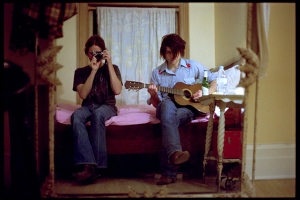 TLF: Both a guitar and a camera are instruments of art, tools of trades, and are dependent on their design and the technology utilized to bring them to life. But a song or a jam can be made up out of thin air, whereas a picture has to be taken of something. So playing music is creating (or recreating) something while photography is capturing and freezing something. What are some similarities and differences between how you approach the guitar and how you approach the camera?

NC: Music and photos are the exact same thing for me. A photo has to be taken “of” something, and a song has to be “about” something. A photo is a song and a song is a photo. They both come out of thin air, and they are both about capturing and freezing something.

There’s a dual action that exists in both of these mediums, and in all things when they’re operating at their best. If you look at the photographs I take, and the music that I make, you’ll see and hear very similar qualities in both. My individual aesthetic is applied to whatever instruments I’m utilizing at the time. END_OF_DOCUMENT_TOKEN_TO_BE_REPLACED