Between the years of 1982 – 1988 my favorite band on the planet–by a wide margin–was Judas Priest. I was borderline obsessed and consider them my first true musical love. My bedroom walls were covered with 6′ posters, wall tapestries, and cut out photos from the likes of Creem and Hit Parader of my leather-clad heroes. When my parents bought me my first Walkman the first tape I threw in was Priest’s underrated debut album Rocka Rolla and I listened to it 10,000 times if I listened to it once.

During this time period you would hard pressed to find a heavy metal band bigger than Judas Priest (maybe Iron Maiden, but that is an argument I choose to not partake in since I had it about 1639 times in 8th grade with my Maiden-loving cohorts. I’ll admit this though: Maiden had way better album covers). They had some radio-friendly singles (“Breaking The Law”, “Living After Midnight”, and “You’ve Got Another Thing Coming”) and pretty much sold out 20,000 seat arenas all over America (I should also note here that Priest was able to achieve this success without ever being considered “sell outs” and continually sustaining respect among their peers, including being one of the few metal bands asked to perform at Live Aid. They had a plethora of metal street cred stocked up in their well).

On June 6, 1986 I became one of those 20,000 fans and attended my first concert ever at the Brendan Byrne Arena in New Jersey: Judas Priest with opener…Krokus (a band that had absolutely zero shot of “blowing” anyone off the stage but themselves). I knew every note of every song they played. I sang along to every anthemic chorus The Metal God sang, and I pumped my 13-year old fists in the devil horn \m/ for 2+ hours. I didn’t want the show to end. It was heavy metal ecstasy up to an including the guy in the row in front of us asking me if I had a rolling paper (I had no idea what a rolling paper was at the time. I just wanted to hear “Victim Of Changes“–which they didn’t play but did at a later show I saw).

Over the next few years I would see Priest only three more times during this peak period of their career. As I aged, my musical tastes expanded and Priest slowly fell out of my repertoire. I always maintained a respect for the band, it’s just that over time, some of their music didn’t age too well and some of their later albums didn’t have the direction and cohesiveness of their previous works. They seemed more like a band trying to fit in with the modern trends (Turbo) vs. creating them (British Steel). Turbo was a synth-laced pop metal album (which some fans, to this day, will never forgive them for). Ram It Down (the last album I actually bought of theirs) seemed like it had the band heading back in the right direction, but it’s trashy, speed-metalesque songs just didn’t sound like…Judas Priest. I mean, it had the fast guitar solos, the insane operatic metal screams, and the “metal” lyrics. It simply didn’t sound like the Priest we were used to but a Priest that was trying to keep up with new up-and-comers like Metallica, Anthrax, Slayer, and Pantera (all heavily influenced by, as Phil Anselmo calls em, Judas Fuckin’ Priest!).

END_OF_DOCUMENT_TOKEN_TO_BE_REPLACED 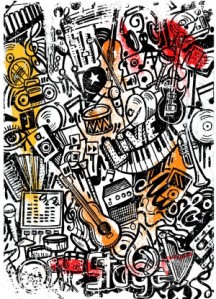 Human curiosity is…curious. I, for one, find myself becoming more and more interested in the methods by which people engage with their music. In the past, purchasing music was somewhat of a ritual: You heard about your favorite artists upcoming album, you saved your money for it, waited for it’s release date, went to your local record store, and bought a physical package that contained the music. Now, one can download and be listening to Michael Jackson’s entire discography within a matter of minutes and share it between multiple devices in an instant. As Det. Thomas ‘Herc’ Hauk once said, “Isn’t technology the bomb?”

Recently, while I was riding the metro into work, I looked around at the various co-zombies on my train. Most everyone was connected to some sort of mobile device and most everyone had headphones on. I wondered: what are all these people listening to? I suppose as a musician myself I am curious about people’s listening habits. That same morning I came into the office and randomly asked some co-workers what song they just finished listening to.
END_OF_DOCUMENT_TOKEN_TO_BE_REPLACED

#10  AC/DC – BACK IN BLACK
Nigel Tufnel of Spinal Tap: “I think he is right, there is something about this, that’s that’s so black, it’s like; “How much more black could this be?” and the answer is: “None, none…more black.”