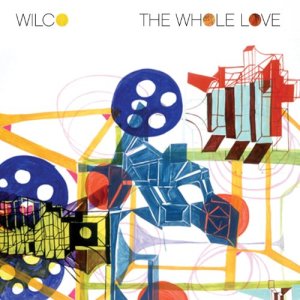 Just as their home base of Chicago sits between LA and New York, Wilco occupies a vast middle ground, having been dubbed with the seemingly opposite labels of “alt-country pioneers” and “the American Radiohead.” Somehow they both fit, as evidenced on their fine new LP The Whole Love. And all that ground between those two labels is the area that Wilco has been working in the decade since their consensus “best album,” 2001’s Yankee Hotel Foxtrot.

Fans and detractors alike are tough on this band as far as expectations. Their albums are all “good” so we take them for granted (not unlike The Roots if you want a strange-but-fitting comparison). When they’re not great, we accuse them of phoning it in, but when they get too ambitious, we say they’re trying too hard. They can’t win. We find them either too boring or too weird.

Jeff Tweedy’s personal fits with addiction and depression are known and don’t need to be re-examined here. But on top of those, and even in his recent sober/happy days, he’s still battled fits of trying to live up to or match the masterful Yankee Hotel Foxtrot album without remaking it. Wilco has tried everything: the experimental, the poppy, the rootsy, the Dad rock; usually all within one album. Yet somehow there were enough near misses that most of us resigned ourselves to the idea that Wilco would never make another truly great album again, but they’d continuing making good ones and that was okay.

Until now. The Whole Love sounds to me a lot like Summerteeth, the underrated gem of a record that serves as the bridge between their two “best” albums, Being There and YHF, both chronologically and sonically. Just something about the way several of the tracks literally bounce along. The songwriting, and the performance and sound of it, it just feels effortless, though I admit that I have no idea what that means and it’s a ridiculous way to describe an album.

Opening track “Art of Almost,” and the closer “One Sunday Morning (Song For Jane Smiley’s Boyfriend)” are truly epic in the pre-internet sense of the word. Both are absolute stunners, and perfect bookends for a set this strong.

“Dawned On Me,” another classic-pop bouncer, has Tweedy admitting “I’ve been taken by the sound of my own voice/and the voices in my head,” and later drops this gem: “The sun rises and sets/As a sun at it’s best.”

Sleeper creeper tracks like “Black Moon,” “Red Rising Lung,” and “Sunloathe” have a classic Wilco mellow beauty to them that’s reminiscent of their finest work. But that glow is buried under a little hiss. And slowly but surely, in many ways this album sounds and feels as much like YHF as it does Summerteeth. The strings are always perfect, never forced or schmaltzy. There’s enough weird trippy trickerations for the folks with headphones, but all the sounds serve the track. There’s no 13 minutes of noise or any kinda bullshit like that. The only thing “missing” per se, would be a “Bull Black Nova” or “Spiders (Kidsmoke)” type of hypnotic jam. Unconventional and underrated drummer Glenn Kotche is as tasteful and effective as ever, while Nels Cline’s guitar is typically furious.

Something about “Open Mind” seems to echo the sound of “Wishful Thinking,” while Tweedy reminds us that “I will throw myself underneath the wheels of any train of thought.” Yea, we know Jeff. This is the same guy who sang “I dreamed of killing you again last night, and it felt alright to me” in 1999, and in a 2004 song, “spiders are filling out tax returns.”

It’s probably cliché, but this is a perfect example of a band hitting that sweet spot where they nail the all-encompassing Classic “Best-Since…” album their fans have waited for, as well as the most accessible record for potential new fans, without “accessible” meaning “non-threatening, like The Eagles,” which is what dogged their 2007 album Sky Blue Sky.

They finally figured out how to take everything they do well, and put it all on one record without overextending themselves. It helps that the songs are great. They’ve always been “good,” but what a difference it makes when they are great.

Essentially, this is The Whole Wilco.