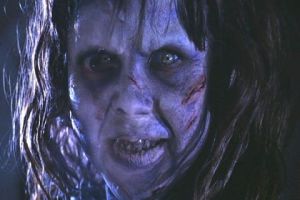 I first have to post a disclaimer: After numerous debates with fellow Bums Logic blogger Jr. Worthy and Ms. FJB, I want to make it very clear that what I define as a “horror” movie is not always in line with what others do. For instance, is Jaws a horror movie? Is Silence of the Lambs? Some say they are “thrillers” and that true horror movies need to contain an element of the supernatural like The Exorcist does. I will argue that mother fuckin Michael Myers has some supernatural powers, okay?

#13 – Hellraiser
Bondage-clad evildoers, skinless-men, some sort of evil box that unleashes demons, and one of the most iconic bad guys in modern horror movie history: Hellraiser. Not the most popular film on the list, but one that made me never want to have my skin ripped off via hooks and chains. Not that I needed a movie to make me realize that.

#12 – The Exorcist
Most critics and fans think this is amongst–if not the–best horror movie ever made. While it’s extremely hard for me to argue against that point, this is, after all, a list of my favorite horror movies. I do love The Exorcist (not loving it is like not loving pizza). Who doesn’t want to watch a child’s head spin 360 degrees while puking on a priest as she tries to seduce him? I won’t even insert a joke here.

#11 – The Blair Witch Project
Let’s get one thing straight: if you are camping out in the woods in the middle of nowhere and you suddenly hear little children playing outside your tent…in the dark of the night…run! That is, unless you want to find yourself staring at images of bloody hand prints on a wall while some witch clobbers your friends and steals your camera.

#10 – Alien
The first time I watched Alien was the first time I almost puked during a movie. When that freakin little fucker came tearing out of John Hurt’s stomach and started galloping around the room like Mick Jagger on acid I had to turn the movie off. Nightmares for months…still have them today! Which also led to me having to constantly ask my mom if there was ever a chance that a baby alien could pop out of my stomach, because every time I got a stomach ache I convinced myself that was the case.

#9 – Hostel
After I watched this movie I had two thoughts: 1. I am never going to eastern Europe and 2. Please tell me these kind of places don’t actually exist. 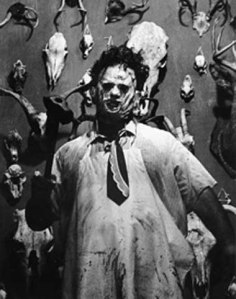 I'm a foodie that enjoys long walks in the woods, animals, and cold cuts.

#8 – The Texas Chainsaw Massacre
Is this in fact a movie or a documentary? I mean, come on, it’s so low-budget and grainy that when I first watched it as a teenager I had to ask myself that question. A lunatic wearing a skin mask (long before Buffalo Bill’s infamous skin suit) and eating humans while squealing like a stuck pig? Leatherface is the one dude on this list I feel really exists somewhere in Texas–and is probably being recruited by the Longhorns as I type this.

#7 – Friday the 13th Part IV: The Final Chapter
I know, I know, so many sequels and why pick part four? Cause it has all the elements that make the Friday series so awesome: great kills, sex-crazed-stoned teenagers at a lake…again, bloody hockey masks (don’t forget that Jason didn’t get the mask till Part III), and some hilarious unintentional comedy. That, and we get a bald-headed Corey Feldman whacking half of Jason’s face off at the end, hence starting a debate among my friends as to whether or not Tommy was going to be the killer in the next movie(s).

#6 – The Omen (Parts 1&2)
Damien Thorn: “Teddy, don’t ever talk about my father again. Do you understand?” A great duo of movies that are both quite solid in their own right, so it was hard to pick one or the other. Some awesome deaths in these films. The trapped under ice scene is the reason I never took up ice skating. The Black Sabbath of horror movies.

#5 – Poltergeist
I spent half of my childhood fearing that the tree that lived outside my bedroom window was one night going to swallow me into its bark-laden mouth from hell. I spent the other half wondering if my friends pool was intentionally built upon an ancient indian burial ground and at any moment we would be swimming with skeletons. Come to think of it, that would be an awesome metal album name: Swimming With Skeletons. Rock! 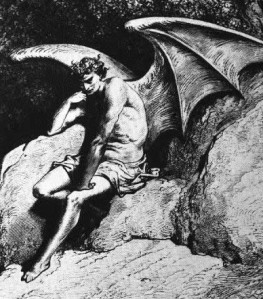 Dear Dad, I drew this picture of you the other night. I miss you. Love always, Damien

#4 – The Shining
I have a line I like to use when winter hits those horrible single degree digits: It’s so freakin cold out that I feel like Jack Nicholson at the end of The Shining. By far the most “arty” film on this list (Stanley Kubrick, you darling) but still probably the most scary. Just looking at Olive Oil, the creepy twins, and naked young-turned-old crazy lady is enough to make me never want to stay at a resort in Colorado. Or ride a Big Wheel. Or be a writer.

#3 – The Silence of the Lambs
What really gets missed most about this movie is how utterly disturbing the Buffalo Bill character is. Most people pay attention to Hannibal Lecter–which is totally valid and understandable. But there are so many cringe-worthy scenes with Bill that make you think he might be the most demented freak on this list. Probably because he’s actually human, and partially because he has lines like, “…or it get’s the hose again” and “I’d fuck me.” Seriously? Who says that to themselves besides Lady Gaga?

#2 – Jaws
Sometimes that shark he looks right into ya. Right into your eyes. And, you know, the thing about a shark… he’s got lifeless eyes. Black eyes. Like a doll’s eyes.

#1 – Halloween
Music plays such an important role in so many movies, especially horror. Besides the famous two-note Jaws theme, is there a more perfectly composed and befitting piece of music for a movie than John Carpenter’s score for Halloween? The second that music kicks in–like in Jaws–you just know someone is about to get fucked up. Also, if you jump on a piano and start playing it, I can almost guarantee you that anyone within earshot is shitting their pants.

Horrorable mentions: Scream, Friday the 13th Parts 1-3, The Thing, Drag Me To Hell, Saw, The Hills Have Eyes, Last House on the Left, A Nightmare on Elm Street, House of 1000 Corpses, Wrong Turn, The Fly, The Prophecy, Maximum Overdrive, Misery, Alligator (simply for the scene in which the kid jumps off the diving board of the pool unbeknownst that the alligator’s open mouth awaited), The Mist, Rosemary’s Baby, Cloverfield, Frankenstein, The Lost Boys, The Evil Dead Movies, White Zombie, 28 Days Later, Carrie, The Ring, Final Destination, The Others, Jacob’s Ladder, The Devil’s Advocate, Salem’s Lot, The Orphanage, Nosferatu, Creepshow, Paranormal Activity, Children of the Corn, The Strangers, The Mothman Prophecies, The Sixth Sense, The Living Dead Movies, Black Sabbath, Deep Blue Sea, Lake Placid, When A Stranger Calls, and The Amityville Horror.